How I Snapped out of my Food Coma 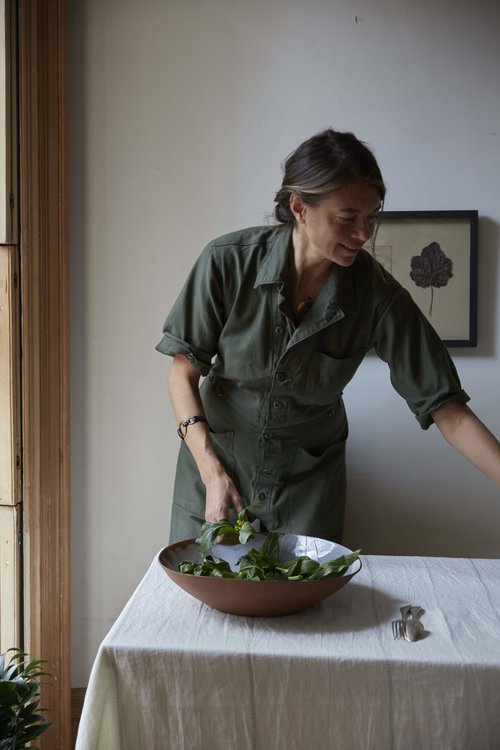 The deep connection that I have now with food has evolved over the course of the years. It has not been as linear as one would think.
Looking back, it is truly with the birth of my 1st child that I reclaimed my ancestral relationship with food.
It’s strange to think how simple it all seems now.

It was 2001, and I had been in NYC for 6 years already.
I was taking a break from my high profile restaurant career to take care of my newborn, Théo. I walked with him, just six months into this world, down the block from our home to the Associated Supermarket on Waverly Avenue in Fort Greene, with the intent to buy food for him, to make his first purée.
I had been to that store countless times.
But that day turned out to be quite different.
I walked myself down the produce aisle, inspecting sweet potatoes, carrots, and tomatoes, only to put them quickly back on the shelves. Theo, in his stroller and his red overalls, who had been in a radiant mood since we had left the house, was not cooing anymore.
Within minutes, I was overwhelmed.
What to feed my child?
It was not the task that overwhelmed me. Smashing a banana or boiling a sweet potato was not beyond what I could handle.

It was the sheer realization of the responsibility I had.

Théo looked up at me.
Strapped in his stroller.
Totally dependent.
Whatever I decided to feed him, he would have to eat. And this would go on for a couple of decades or so. I picked an apple and looked at the label. A voice appeared in my head – my own, but with a new heft behind it: “Where does it come from?” I wheeled around in the supermarket for maybe 15 minutes. My throat grew very tight.
And then it all came back to me.

My grandmother’s Garden.
The first strawberries I would pick, crouching down the narrow aisles to spot the perfect bright one hidden under a leaf, savoring the ephemeral moment of it bursting in my mouth, warm and juicy.
The last white asparagus I would devour with an undepictable nostalgia that only an 9-year-old can have upon being told that she would have to wait a full year before having her favorite vegetable again.
The cherries I would pick from the tree, eating them in the shade, woven empty basket at my feet, t-shirt & chin sprinkled with purple juice, eating as many fruits as my stomach could bear, hearing my grandmother laughing and calling me the sloppiest-slowest harvester ever.
The butter she would make standing up in her kitchen, shaking the milk she had just bartered from her neighbors, me watching the curd magically appearing in the large jar.
The lettuce freshly picked from her garden that was still bathed in the morning dew that we would not even wash & eat standing up in her garage.
The taste of the cherry clafoutis made with the eggs just laid, the dough a swirl of orange from the yolks & bright purple from the cherries that had bled their juice in.
The preserved September pears that we would discover with joy in the middle of the winter, infused with star anise & marjorlain & carefully stored away: with a twist of a cap, we would open the jar and be transported back to the previous fall, its textures, colors & smells.
The tartine of pain de seigle, spattered with salted butter & strawberry jam that I would dip into my hot chocolate, the fresh milk so creamy it was almost as thick as a pot de crème.
The sardines, so vibrant that I would eat in the summer during my vacation with her on the Southern Coast, devouring them with my entire body, feeling like I was engulfing the ocean & the sky & all the clouds that were floating on both.

Just like that, standing in the Associated Supermarket in Brooklyn some 20 years later, it all came back to me.
I could see my tiny little Grand-Ma, Mamo as I would call her: her wrinkled face, her vibrant dark eyes & abundant white hair, hunchbacked & almost half my size. Gently pointing her finger torn by arthritis at me, she was smiling & whispering to me, half amused, half worried, fully concerned:
“Do you know who grew that? Where does it come from? It is not peach season yet…”

Just like that, I snapped out of my “food coma.”
A coma induced by the glittering food dream of the city’s fancy restaurants & alluring chefs.
“Tuna from Japan? Sure, Fedex it over!”
“Mushrooms from Italy, Peaches from Argentina? Send them all!”
I had lost track of the most basic thing: knowing and understanding what I was putting inside my body, what truly fed me.
Alice Waters said, “You are what you eat.” If so, what was I then?
A December strawberry from Peru, heavily treated to make it to NY? It was one thing that I had looked away & not tended to my body properly.

But could I do just the same to my child who had absolutely no choice, no knowledge? That seemed not only absurd, but cruel.
I had been lucky enough & truly privileged to be taught differently.
I needed to spend that privilege.
Needless to say, I walked away from the supermarket empty handed that day. Theo had to wait a couple weeks for his first solid meal (rest assured though: my now 18-year-old is 6’6.” I do not think it delayed his growth spurt…), giving me time to reassess where & how I would feed myself & this kid from now on.

A couple years later, my second son Lucas was born & by then, I had found a flow for our daily meals.
When I opened my 1st restaurant in 2004, the kitchen there truly was just an extension of our home. There was no marketing plan, just a vision, simple and clear: I will not feed my customers anything that I would not feed my kids.
To this day, my “mission” has not changed at its core. It is very much what I am doing everyday at Maison May some 18 years after that day that I strolled down the produce aisle with Theo.

Over the course of those years, that very intimate & visceral epiphany was followed by a deep awakening in me to the dramatic effects that the entire world food system had on people in general, and the American one in particular, with all its social, environmental, political, racial & historical implications, an awakening that only strengthens my determination & commitment.

But that is the story for another time, one I am afraid  that will not be as bucolic & deeply photogenic as a wild French 9-year-old girl gorging on fresh berries in her grandmother’s garden.

Happy Spring – see you at the Green Market!