In the spring 2008, I took a sharp turn.
It involved first & foremost, to pick up my children & run from home in order for us all to be safe, physically & emotionally.
I will of course never forget that day.
Its color, its texture: it was bright red & orange, like a scream, vibrating from my guts piercing my heart & soul.
But what I remember the most vividly is the actual physicality of it all:
I carried my boys out of the house.
It came as an acute sensation of strength & empowerment as I was able to lift my 2 (giant) boys, age 5 & 7 at the time & run with them.

Almost the same day, I started lifting a business that was on its knees & ready to go bankrupt: ICI (now called Maison May Dekalb) had not been spared in the devastation that had stricken my home & family.
I was standing on what felt like smoking ruins of a beautiful edifice after a devastating fire. The walls were still standing but all inside had to be cleaned, organized, sorted through & the wobbly structure needed my constant attention & presence in order to stay up.

So I embarked there & then in that incredible journey of carrying head on 2 young boys & an exhausted business -“à bras le corps”.

During the incredibly challenging years that followed, I hanged on quite often to that picture of me & my 2 boys cruising down Gates Avenue as we ran away.
It was a strong image, a manifestation of a new found mental strength, a powerful symbol on my ability to carry.
There was something soothing about it as its pure mechanical quality made it seemingly possible to reproduce at all time. I could carry my boys,  & it had an immediate tangible result, the way I could work at ICI, pull so many hours a week, and clean things up.

Then things shifted in my soul.
Because one day, I woke up realizing that I could not carry them anymore.
My boys.
My 2 giants had grown so much, that physically, I could not lift them anymore.
A sharp reality started torturing me then:
How could I protect them from what I know could be lurking if I could not lift them physically?What if I needed to protect them from the extreme again in a way that would require an emergency exit such as the one we took in May 2008?

And after all, isn’t life a succession of small & big emergency exits? 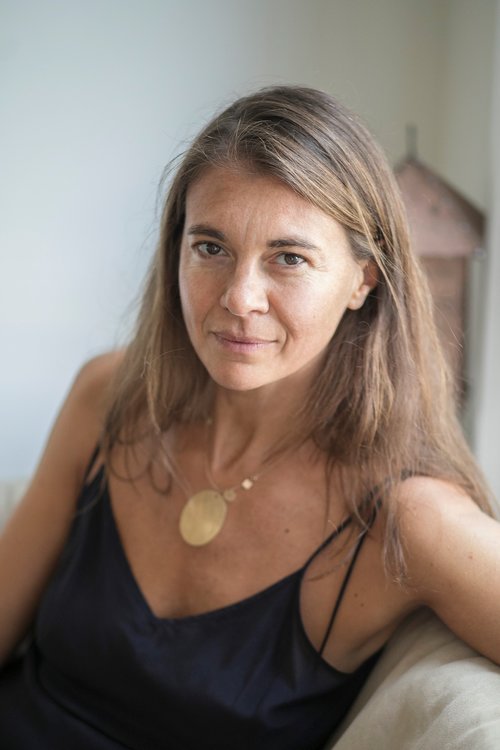 Catherine May of Maison May, poses for a relaxed daylight portrait in her home in Clinton Hill, Brooklyn. Photo by Sharleen Rydie, London Red

The physicality of my boys being at a tender in-between age & my realization of my incapacity at lifting them to a safe place was of course a subtle allegory to their emotional development.
At age 5 & 7 I had taken a conscious executive decision to protect them from a danger that I had been able to identify. Now pre-teens, I could not carry them physically & not entirely emotionally either.
At the same time my business was growing back some roots, and results of my intense work were starting to show, but I was still needed most of the time. Like my children, all was seemingly going in the right direction, yet the path seemed endless & the outcome still completely uncertain.

There was a day then, when I collapsed in my therapist’s office.
Down on my knees, I was sobbing, exhausted by what I had accomplished already & drained by the mere thought of the road ahead, the length, the responsibility of raising those boys alone, of carrying this restaurant that was our livelihood but that seemed to be consuming so much of my life & energy.
I was feeling sorry for myself & just plain tired.
Tout ça pour quoi?
All this for what?
I felt like I had been walking in a tunnel of endless darkness.
As I was hiccoughing my sorrow, my therapist snapped at me:
“You are tired Catherine?
Get used to it!
And start running.
Exercise!
Run every day if you can.
Run like you are training for a f..king marathon.”
She paused.
I was startled.
I was waiting for the rest & already, something was shifting inside me.
With a soft & compassionate voice, she continued, her bright blue eyes submerging all the darkness in mine:
“Catherine, what you have started for yourself, for your children, for your business is not a race.
It is a marathon.
It is a project of a lifetime with milestones.
No, you will not stay exhausted like this forever.
And no, you are not stuck.
You are marching on the right path and you have a lot to do.
You are not used to that modus operandi & it will take time to grow new muscles & to embrace your reality.
But here is the good news: the hardest part is over.
You are going up now.
And know that there will be many occasions for joy & celebrations along the way, until you get out of this tunnel for good”.

So right here and then, I picked myself up again & stopped running for my life & started jogging.
In the streets of Brooklyn, at the gym, in the park, in my business, with my boys.
No time to feel sorry.

The plan in the end was simple.
If I could not carry my boys anymore, I just needed to teach them how to carry themselves, as I was doing it.
And at the same time, I shifted the way I approached my business: I started dreaming about what I could express through it to support a larger vision that could feed my soul & have a higher purpose than a simple restaurant. ICI was not a final destination anymore but a way to propel myself further.

Well, easier said than done:
Because all of that required from me blind trust.
Not in myself, but in my children & in my vision.
The way  I wanted to raise my boys for themselves, not for me, I wanted to create a business that would be larger than me, and not just for me.
In the meantime, and while I was working on all that,  I would need to carry what I still could, with the boys & the business and trust what I didn’t know yet.

And then this summer, it happened.
The end of the tunnel.
It all started manifesting itself as my older son took his first emergency exit by himself.
It will stay forever a defining moment in my older son’s life & in his brother’s who witnessed it all.

There was no doubt: I watched him going through an incredibly emotionally challenging situation and landing on the other side of the mirror.
He did not need me to achieve it. He had carried himself out.

By himself.
For himself.

With grace, integrity, strength inside & out, with so much beauty, radiating light in the mist of a huge sorrow, as one does at times upon by realizing the magnitude of the shadow that needs to be faced in order to harness a deeper wisdom.

The morning after that episode, I woke up a new woman.
And I have no doubt, he woke up a new young man.
I was swimming in a new reality that took hold of me immediately.
An incredible load & so many fears had been washed away.
I was not afraid anymore to not be able to carry them physically anymore.
Because I did not have to carry them emotionally anymore in that same intense capacity.

The sky looked endless that day as I sat on my deck.

That same week, I walked into a staff meeting & after 2 hours of talking with my entire crew, I realized that the brand new team that I had been carrying for the past year since I had launched Maison May, was not brand new anymore (I lost gradually my entire Front of the House team as I open my 2nd business & transitioned into removing tipping from both locations).
During that meeting I saw that I had rebuild not only a strong team of professional individuals, but one who are caring & truly appreciative of the work they were doing & in it for the vision that I started to manifest forwardly.
I was not lifting anyone anymore. We were all in it together, invested.

That day I realized that I could start let go of that grip, of that tight fist that I had to maintain in order to keep it all running.
For the past year.
And for the past 8 years before that.
I could now fully explore my vision in my daily work rather than managing a business.

The possibilities are endless now & for me to choose from.
Feeling strong in a different place.
As if the muscles I had grown to get here are now moving inside me to be re-dispersed for other functions.

And I am smiling.
Remembering that biodynamic winemaker I met long ago who got pregnant during the winter.
And it happened that it was during the harvests that she delivered her baby boy, in full harmony with the universe she had created for herself.
She had planted, cultivated & was then harvesting what had grown inside & outside of her.

My cycle feels similar.
I am aligned & at peace.

And starting the harvest season right on time…