It is a delicious & warm evening in May.

It is dark out & the string lights of the garden on Dekalb are gently illuminating the back windows of Maison May Vanderbilt.
Friends, staff & regulars have gathered to celebrate Maison May 1st anniversary & my 44th Birthday.
Standing in front of them all, and without having planned on it, I share a story I never quite revealed to many before.

Catherine May – On Entrepreneur’s Responsibilities 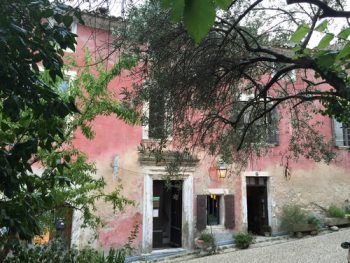 “A few summers ago, I traveled back to Provence.
It had been a long time since I had spent time where I was born.
Up to very recently, I had an uneasy & fragmented relationship with my country & my roots.
It was impossible for me to embrace where I came from, with all its beauty & all its darkness.
That trip was very much initiatic, although I did not label it as such at the time & went headfirst into the lion’s den…

Excitement, sorrow, confusion & joy was what I felt as I landed in Marseille.
I had planned to spent time with friends then have a few days alone to do a pilgrim to a little town I used to love, in the heart of the Luberon, heading after further South to meet other friends.

During the short time I was on my own during that trip, I was robbed.

All the sudden, I had nothing left but the light summer dress I was wearing along with my favorite necklace, a pair of sandals and in my tote bag,
my sunglasses & my 2 passports.
Et c’est tout.

The earth was spinning dangerously under my feet: I was struggling to catch my breath.

It was beyond the material possessions that I had lost. I could feel a deeper gap, a giant black hole shaped like a devouring mouth was trying to swallow me back.
The energy was potent. But there & then, there was nothing that my consciousness could grasp.

After I left the gendarmerie to report the crime, I decided that I needed to keep on marching on my pilgrim. I adjusted my itinerary just so slightly as to not throw myself into more emotional distress & decided instead to stay on the edges of the familiar grounds, avoiding places & memories directly linked to my childhood.

This is how I ended up at Oppede-Le-Vieux on a rainy Tuesday afternoon in August, this medieval village I had never set a foot into.
Driving there in the tiniest Austin Mini, I was struggling to not feel sorry for myself: The low sky & light cold rain, incredibly rare in that season, were not helping me.

I parked in the lower part of town as one cannot drive up in the oldest portion of the village.
My sandals were incredibly slippery and not quite fit for a hike on the wet, mossy cobblestone path that was leading to the old town.
I had nothing to protect myself from the rain & I must have looked quite disheveled in my wrinkled & soaked summer dress, stuck to my body.
I arrived in the center of the little village feeling like the modern version of a harpy: I was carrying inside me the storm that was raging outside.
The square was empty.

I looked up: a church was perched on top of a little hill.
I took off my sandals and bare feet, I started my ascension.
There was moss & herbes folles on the path, the cobblestone were polished by many centuries & the ground was feeling alive under my feet.
The rain was starting to be more gentle.

And finally, the church emerged, standing tall in front of me.

I placed my hands on the walls, and I could feel layers of life, centuries of joy, pain, birth, death, of weddings, funerals, gatherings, persecutions,
unspoken sins, pleas for redemption, faith, treason, centuries of life, barely contained in those magnificent ancient stones.

Above me, the clouds in the sky were racing, snapped up by an invisible force.
The horizon was turning purple & pink, ready to make amend for this rainy day with a beautiful sunset.
The clouds eventually all vanished & only my eyes were raining, quiet tears rolling down on my cheeks.

I walked back down and sat on a bench on the square.

It was lined up with the most beautiful old houses, light pink & yellow, with wisteria pouring from gazebos.
2 bars were facing each other & it felt like at anytime Edith Piaf could storm out from one of them, to sing & dance.
I had made it into a French postcard.
The gentleness of the lines, the quiet beauty of the old houses were soothing.

And then the postcard turned into an old movie.

“Le barman” started setting up tables outside & a trio emerged out of nowhere & started playing some old tunes.

Within minutes, both terraces were full. Chatters, laughters, bottles of wine or pastis at every table.

A few couples were dancing, children were running around, jumping & squealing.

My phone rings: on the other end, my boys.

On vacation somewhere else, they chose that very minute to call me.
And just like that, they are right here with me on this place du village.

Now I am laughing. 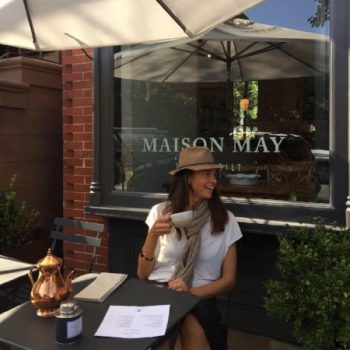 Catherine May – on Entrepreneur’s Responsibilities

My dress has dried up.
My feet, washed.

I leave a few minutes later.
Something has shifted so deeply in me: I need to sleep.”

I pause to catch my breath.
We are back in Brooklyn in 2017.
Maison May is absolutely silent & I have a few dozens of people who I love, starring at me, waiting for more.

“This church in this story is a deep symbol for me, a symbol of what an entrepreneur’s duties & responsibilities are nowadays:
To start something bigger than oneself because the task at end is so huge that it can not be completed in one’s lifetime.
The people who planned, designed, drew, dreamt that church knew they would never see it completed because it would take more than a lifetime to build. Yet, they set on that path. Yet, people joined them, believed & took part in that construction, with pride & dedication, with a motive that was beyond one’s own narcissistic achievement & success but in the name of a greater good, of a vision, something that should stay & stand for centuries & serve a purpose for its people.

I am not Christian (anymore), and the metaphor for the church should not be attached to religion. And I am not building a church here at Maison May…
But I am dreaming of something better & want to be part of that construction. I want to be part of something larger than me, something that will stand long after I am gone from this planet.
I want my enterprise to be like one of those stones on that church: something that contributed to a greater good, one of those stones that in 2 years, 20 or 200 years, will still reverberate its potent vibrant & nourishing energy to who ever places its hands on it.”

Celebrating this 1st year of Maison May and unexpectedly remembering Oppede-Le-Vieux sealed that 1st phase for me.
I came to realize & now accept that the task is bigger than me, and that it should not stop nor derail me, and that in essence, I will never be done.

For the past year, I have very often woken up overwhelmed.

Overwhelmed by the task at hand that I decided to put on my plate, and not only by the mere logistics.

But yet, deeply aligned.

Because of the realization that all I am working for, all I am marching towards is in the purpose of building something better, bigger than its 4 walls, something that would reverberate energy & feed its people beyond the food its serves.