Chatting with Catherine May About the Expansion and Evolution of her Fort Greene Farm-to-Table Trailblazer, iCi

I recently had the opportunity to talk with Brooklyn Magazine’s Sarah Zorn about the recent expansion and evolution of ICI into Maison May. Read on:

This is the quote (taken from Buddhist activist Thich Nhat Hanh) that helped serve as catalyst for a major shakeup at Fort Greene’s seminal local-seasonal eatery, iCi, after owner Catherine May stumbled upon it back in 2013. “I’m from France, but I don’t have many roots left there. I was literally uprooted. I got married, and that marriage ended. And then I was living in Red Hook when Hurricane Sandy happened,” meditated May. “But what I first began to realize, as I was standing in the street with my two suitcases and two boys, is that I didn’t need anything else. That I AM a home. I’m a home for myself and I’m a home for those boys.”

“And I think the feelings I had then–perfectly articulated by the quote that I discovered later–was a starting point of understanding that I have that in me,” she continued, “the ability to bring people home.” 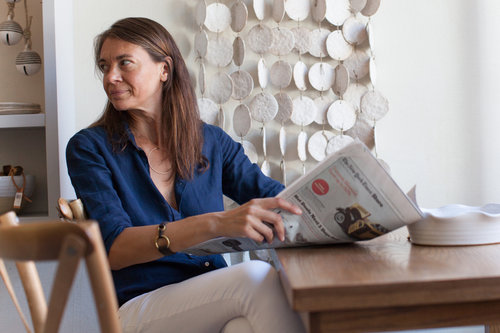 It’s a calling she aims to realize through both her convivial dinners and deeply personal events at iCi (recently rebranded Maison May Dekalb) and–perhaps her truest expression of self yet–Maison May Vanderbilt, a wholesome all-day café and harmonious gathering space. “By creating an atmosphere of home between my two places, I want people to feel anchored, no matter what else life throws at them,” May said. “And since I’ve already been in this community for 12 years and I have 14 years left on my lease, believe me, we’re not going anywhere.”

We also spoke with May about her intricately linked (and often conflicted) relationship with her businesses, the irony of orchestrating weddings in the wake of a painful divorce, and why Maison May Vanderbilt patrons are kindly requested to leave their laptops at home.

iCi had been a Brooklyn staple for over a decade. Why expand, and essentially, rebrand all this years later?

The life of iCi is like the life of a woman: it goes up, it goes down. And the story of iCi is tied to mine–I opened it 12 years ago with my husband, I eventually kicked him out because of his drug addiction, and then I spent the next six years raising my two boys on my own and building and rebuilding the business. iCi became a reflection of my journey to take back my life, and the next step of that was to push further and open a second business, one that I didn’t have such a love/hate relationship with.

I’m actually surprised you didn’t do it sooner. Talk about irony: you’re stuck with a business that you’d created with your ex-husband, which quickly ends up becoming one of Brooklyn’s premiere wedding destinations!

2008 was the year of my divorce, the year that everything collapsed and I felt everything was switching around. But it also happened to be when we truly began to transform into an event space, and I remember standing in the garden at iCi doing wedding after wedding after wedding and just bawling. Not from envy, but because I was deeply hurt and mourning and every bride was activating this gush of blood. But in the end, it helped me to keep my sense of humor and my composure, and yes, my faith in love too, because it wasn’t about me. And I was able to find happiness just being able to share in all of these joyful moments.

So how did you end up finding the space for Maison May Vanderbilt, and how did it inform the evolution of both restaurants? 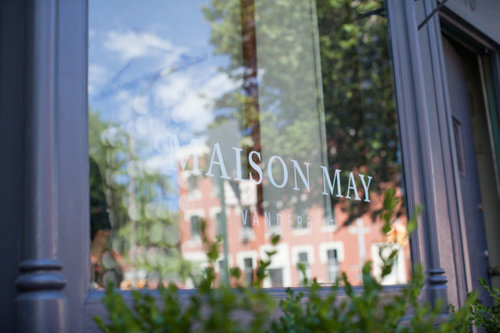 I looked for a space everywhere in Brooklyn, with no luck at all. And just as I had given up, on November 11th of this past year, boom, this space opened! It gives me goosebumps just thinking about it. But since it was so close to my original business I could only see it as an extension, rather than a separate entity entirely. It’s a house getting bigger. It made me realize the thirst I had to create something with deep roots and a foundation. I was looking for the name and everyone I knew suggested something that built on the name “iCi.” And for some reason I couldn’t see it. Instead, I thought of “Maison,” which means home, and “May,” which is my last name, and realized that it couldn’t be a situation of the big brother leading the way, but the little brother, the newer entity, changing course. All of my male friends told me I was crazy, that iCi is the entity, iCi is a brand. And my marketing friends were horrified. But I followed my instincts and I’m glad I did it.

Are you concerned at all about alienating old customers or confusing new ones with the identity switch?

When it comes to Maison May Vanderbilt, I think most people understand that there’s a story there, that it’s more than just a second location, but a manifestation of myself. It literally looks and feels like me. People have been incredibly moved by the honestly and vulnerability I’ve put on the table. But since Maison May Dekalb had been iCi for 12 years, sure, we’ve had a few customers that would prefer to stay stuck in the past–they don’t want any change. Of course it’s not change, it’s evolution. It’s about the strength to be able to reinvent oneself and keep going.

How has Maison May Dekalb transformed, exactly, besides the name of course?

For the most part, nothing has changed, the team is the same. But what is becoming more obvious is that iCi — now Maison May Dekalb — is largely an event space. So the major switch is that we’re favoring those events more and more, restructuring the dining room with communal tables that can seat two people or 100. If you’re looking for a space to dine with 16 people on a Friday night, this is the place for you. Because what I’ve always liked about the restaurant world is being part of something bigger than dinner. It’s an incredible honor to have people tell me that they want to get married in my house. It’s such a show of trust. Whether it’s a wedding, a bridal shower, a baby’s welcoming, your mother’s 60th birthday, your uncle’s funeral, we’re here to celebrate and honor, and I’m good at making sure that everything’s done in the most gentle, ethical, respectful way. 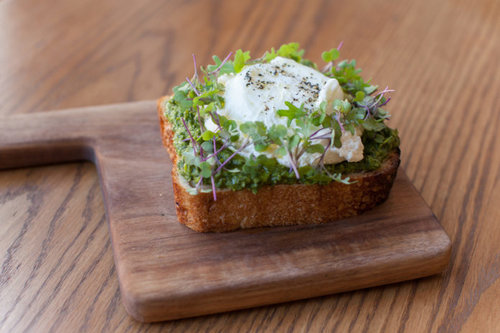 So tell me a bit more about your strict “no laptops policy” at Maison May Vanderbilt!

You can order a single cup of coffee and stay all day–it’s not about kicking anybody out. I want everyone to think of this as his or her home. But I also want people to come in and connect. Why go to a public space, otherwise? Every once in a while someone will unknowingly open their laptop, and talk about a shift of energy. The minute that happens everything changes. So I’ll go over very gently and remind them of our rule, and I would say that 9 people out of 10 are so happy and relieved, as if I was giving them the permission to let everything go.

In this country, we don’t value longevity enough. And that’s what sustainability is: being able to hold something for a long time. Lifestyle means a style of life. I’m talking about my life here–I’m building Maison May and I will continue to build it for the next 14 years if I’m lucky. That kind of longevity allows you to think past the short term, past making a quick profit. If instead, you focus on providing quality and making people happy, success comes as a collateral damage. So I make people happy and I know where I’m going and that I’m feeding my guests and my employees and my boys, and I think this is what matters, this kind of lifestyle.

Tell me about your blog, which is where you first began dropping rather poetically phrased hints that changes were a-brewing at iCi. There are two sections: one focused on wellness and recipes and the other titled “Female Form.” What was the inspiration and mission behind starting a blog for you?

It came super unexpectedly. The only career plan I ever had in my life was being a journalist when I was a teenager. And a few years ago as I was making an attempt to save iCi and just emerging from that, a friend suggested I write a blog in order to share all of my stories: about raising two boys, about saving a business in Brooklyn, about kicking out a husband that was a cocaine addict, and it was all just the tip of the iceberg. So I started jotting down a few things, and I found so much joy in it. It’s helped me articulate where I’m at: every post is the image of what’s happening in my life at that moment. And once I write it down, I find myself able to own it. I’m able to set it to rest and move further. Then once I put it out in the public, all it takes is one person to react and my day is made. Since I’m so intimate with what I write, people have a very intimate response in return, and then it takes me right back to what we were talking about before, we’re able to forge a connection. And that fills me.