No Way Home – Home is the Way

Picking the story up where I left off:
On a cold February Morning, I am standing on the Southwest corner of Dekalb & Vanderbilt.
On my right, ICI (now called Maison May Dekalb,) the restaurant I have run for the past 12 years.
On my left, the spot I took over a few weeks earlier and that I am due to open in the spring. A deep emotion is moving through me.
The name emerged last night & the words are swirling in my head: 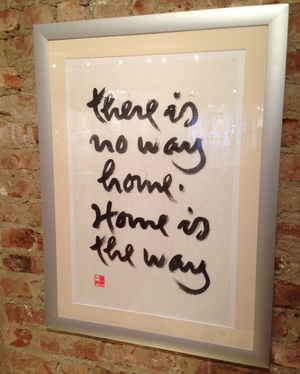 Giving birth to the name has been the hardest part of the process.
But right at that moment, standing in the bitter cold, under a bright winter sun, a weight seemed to be lifted in an incredibly powerful way, as if the name was what was missing in my equation and necessary to propel me further.

Maison May
Maison – Home
May – My name & my birth month.

I am looking at the new space where construction has not yet started & I smile.
And then my eyes fall on ICI.
Between the two I have my life spread in front of me:
my past & my future, my roots & my vision.

In a flash, it all settles down very clearly.

Maison May embodies my journey, my personality, my mission.
It is not a name, it is a manifesto.
This is what I have been building: une maison. A home for myself, for my children, for the community, for anyone who comes in contact with it.
The name, ICI, doesn’t carry any of the story that I have been writing.
On the eve of stretching my wings further, it became very clear to me that ICI’s identity,
not the physical space itself, not the business in itself, but its name simply has to go.

ICI means “here” in French and was named at a time when a husband & wife wanted to express their ambitions, desires, and vision– which was to be one of the first farm to table restaurants in Brooklyn. And even more simply to claim that we were here, using local products. (Choosing a name that was meaningful yet absolutely un-pronounceable for anyone who doesn’t speak French — which is a good 99.9% of the population – let’s call it a beginner’s mistake.  It will take me some years to recover from the countless times I heard it mispronounced – icy, itchy, i-c-i…).
But then shortly after its birth, ICI became the main instrument for one of its owners to sustain his addiction.

Upon taking back control over my life in 2008, I was left with a business on its knees, and a terribly complicated & ambivalent relationship with it.
It was the one thing I had to give my all to in order to stay in this country and feed my kids.
But, at the same time, it embodied the most painful 4 years of my life.

About 5 years later, in the winter of 2013, I started to understand that I was building something and not just swimming through mud and picking up the slack.
It was during the holiday season.
I went to ABC Carpet Home in Union Square.
I like to go up & down the 5 stories of the store to feel the abundance of it all, especially during the holidays.
That day, I stumbled into an exhibit on the mezzanine: on the wall, in beautiful calligraphy were quotes of Thich Nhat Hanh. The atmosphere was really quiet, the light really subtle.  I was alone during those holidays, and was going through a rollercoaster of emotions: happiness for the quiet I could have for once, and the sort of emptiness that came with it which was mostly generated by the incredible social pressure of fitting into normalcy rather than reality.  I was walking on a thin line.
With all that, I stepped into the room unaware of what was about to hit me.
I had come to please my eyes & in fact I was due to leave with something much bigger. In beautiful bold letters, quietly sprawling above a deliciously fluffy pink sofa, there it was:

I am not sure what forces kept me from sliding down on my knees, from curling into a ball & sobbing. (Well, I do know, actually. I am a New Yorker after all– one who knows how to keep her cool in any circumstance in public no matter what crazy things happen, inside or outside…)
But inside,
I was sobbing,
I was screaming.
I was grunting.
I was on my knees…

I had lost it all in the past years.
The divorce & tragic story that lead to it had revealed to me that I had been estranged not only in my own marriage, but in my own family.  And, consequently in a lot of other parts of my life that I had built leaning on those models that were actually just a parody of integrity.
Home was something that I mourned and longed for, which I knew I could not go back to because the only manifestation that I ever had of it had been a mere illusion.  I was mourning the idea of it, remembering at times when I was in the coma and thinking that I had that shelter. The process, spread over the past years, had seen me go through phases of depletion, grief, anger and now I was just feeling empty, sad & tired.

And then with that, something shifted: there was no way back, this I knew. And right there, for the 1st time, I started owning the deep process I had been going through.  Now I was ready to move beyond it.  There was no longing to have; I was building my home. I had been all along, in the mud and all. I was building it at every level, metaphoric or not, for myself, my boys, my business.
A Home.
Une Maison.
It took me another 3 years to stand at the corner of Dekalb & Vanderbilt, to take the final step, and to have the courage to go through that transition that clearly embodies the success of my journey. And, to fully live my manifesto:  Maison May.

In a few days, the sign in front of ICI will be taken down & Maison May Dekalb will rise.
This has been a home for many already, and in the past years the space has been recharged with the energy of all the happy celebrations, weddings, dinners and showers.

Around the corner, Maison May Vanderbilt will swing its door open for the 1st time.
That already makes me smile because I was able to build it as it was meant to be since day one: my home, a maison where I can welcome you all.
It will be an incredibly bright café, during the day, a quaint room for private dinners in the evenings, and many more things that you will need to come and discover for yourself.

A dear friend recently asked me how I will know I have succeeded with Maison May.
Well, Holly, I think I know now: I already have with Maison May Dekalb.
And if only 1 person shows up on the 1st day at Maison May Vanderbilt and they feel at home, then it will be complete.