New York is one of the most vibrant cities in the world, but also a social jungle where it is so easy for an individual to get lost. Every morning, just while strolling half-a-block to the subway, I pass more people than I would while sitting on a bench for an entire week in the small town of my native Provence. Yet it is rare that I ever talk to most of these people. 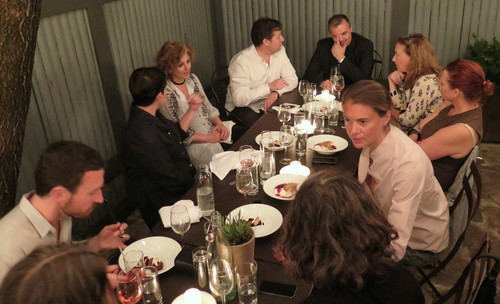 We are all busy with our own lives, and we live in a day and age where social interactions are often coded in “likes” and “hearts,” making human connections even more difficult to foster. We are more connected than ever before, yet essentially we are alone together. I have been thinking a lot lately about how one can create and maintain a healthy village in the heart of this social jungle. As the first step in building my own village, for the past few months I have been hosting community dinners at ICI (now called Maison May Dekalb ).

These dinners grew out of what General de Gaulle referred to as the Traversée du Desert—for him, the period after World War II, before he became president, when he stepped back from public life and found his new purpose. For the past seven years I have kept close to home, reserving my energy for raising my boys and rebuilding my business, while relying on my amazing staff and a handful of very close friends who have become like family. Now I feel I have a newfound purpose. Late last year I launched this website as part of my strong desire to lay the foundation for the ecosystem I am now building. Having crossed my own desert, I am now ready to explore new dimensions for my career and my life. As I set out down this exciting new path I am yearning for a larger community. I know it will take a village to build what I have in mind.

So I started reaching out to people who have been a peripheral part of my life all these years—acquaintances, regular customers, friends of friends. Each month I reach out to a diverse array of people from different careers, backgrounds and walks of life. Then I gather them around a table to share food while sharing my hopes and vision. It is not about brainstorming or networking (argh, that may be my least favorite word EVER), but just a chance to come together and see what happens. We are only a few months into the process, but after only a handful of dinners it is already very clear that these evenings present a gentle yet powerful way to weave people together and build community.

I always smile when I have the chance to introduce people who have lived two blocks from each other for a decade, who have both eaten at ICI (now called Maison May Dekalb) more times than I care to count, yet have never met. From there, I witness conversations spring up as my guests discover shared interests and mutual passions. It is so special for me that ICI (now called Maison May Dekalb) can play this vital role in Fort Greene, serving as a place where community grows. This is a diverse, vibrant neighborhood whose residents have been a huge part of shaping my business over the years to what it is now. There are so many people from different horizons living here, and as I set out to expand and open more businesses in Fort Greene soon, my goal is to feed and inspire these people. Seeing these evenings take off feeds my own desire to build a village for myself, and for the people around me who express the same desire.

For the past decade I have been fortunate enough to build a business out of ICI (now called Maison May Dekalb), yet these dinners allow me to fulfill a very different desire: to share food and company with no ulterior motive. After our second community dinner one of my close friends suggested I should really charge people, since food and wine is served in abundance. That really struck me because I had never even considered it. She looked at me bewildered: “But you own a restaurant, Catherine! This is your business!” (Liza, I love you!)

Yes, of course I run a restaurant. And please, do not expect me to waive the bill every time you come in for dinner. But on these particular evenings, I consciously choose not to put money in the middle because it is not about building a business, but fostering a community. Sharing food, sharing laughs, sharing dreams—that is something that cannot be bought. This thought brought me back to the night 11 years ago when ICI (now called Maison May Dekalb) first opened. I had built this place (partially with my own hands) and it felt like an extension of my living room. It took me a few days to actually charge the customers coming through the doors. I had never charged anyone I fed at home before, and it felt odd to do so now. Of course I eventually got over that, but I still recognize that sharing food is a very powerful thing. It is more than just feeding people. It is a gift of life, power and clarity— because without food, you have none of those things. These community dinners brought me back to this very primitive relation to food, which is the reason I created ICI (now called Maison May Dekalb) in the first place.

By 11:30 pm last Tuesday I had to gently kick everyone out. We all had a long week ahead of us, especially with the busy Mother’s Day weekend coming up at ICI (now called Maison May Dekalb). People who were strangers four hours ago were now engaged in vibrant conversation that all of us wished could go on even longer. I smiled again, knowing that it would be a sleepless night for me, so charged was I with the energy that had flown freely through the evening.

“When an individual’s particular kind of soulfulness, which is both instinctual & a spiritual identity, is surrounded by psychic acknowledgment & acceptance,
that person feels life & power as never before”.
Clarissa Pinkola Estés, Finding One’s Pack: Belonging as Blessing from Women Who Run With the Wolves