I realized one day in the supermarket I wanted to know where my children’s food came from and from there, committed to serving my community only food I would serve my children. 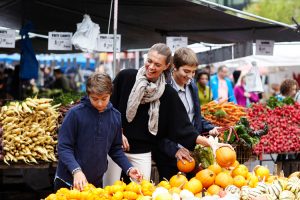 I was born in rural Provençe, in southern France. By rural, I mean that the village where I grew up had 400 inhabitants and the closest town, five miles away, a whopping 5,000. My everyday surroundings were fields and farms. When I would open my bedroom shutters in the morning, I could see just three houses amidst woods, fields, a couple of farms with more fields, and orchards in the distance. While my mother, by her own admission, had always been a relatively poor cook, many other women in my family held a deep sense of cooking, especially my maternal grandmother and a few of her other daughters, their style rustic and authentic. My earliest food memories were punctuated by many dishes and flavors that had all deeply ingrained in me a sense of place and season, from summer ratatouille to grilled sardines. We ate what was growing at the time: before I left France I never would have had a strawberry in December. It would not have crossed my mind to buy something so seasonal at a different time of year, because that simply was not done.

But then I turned 22, and moved to NYC. Armed with all the exuberance of youth, I set out to discover New York as I was starting my career in the restaurant business at the same time. One brilliant way to do both at once: eat my way through the city. My first year there, I was living and working in Manhattan, and during that year I never left the island. My off days were spent on intrepid missions mapped out from food guides. Each week was a new discovery: latkes, goat curry, empanadas, uni sushi. Every penny I earned, if not sent back to France to pay off my college loans, was spent on food. So began the era of what I now refer to as my food coma. What mattered were the tastes, the experiences, and the instant pleasure that came along with them—and nothing else. It took the birth of my first boy, Théo, in 2001, to snap me out of it. We were living in Clinton Hill at that time, and on a bright June day, with Théo in the stroller, I found my way to the local supermarket to buy what would become his first solid meal after having solely breastfed for the first few months of his life. I remember that day clearly: it was 13 years ago, but I could tell you how sunny it was and what Théo was wearing. Strolling down the produce aisle at the Associated Food Supermarket on Waverly Avenue, I felt surprisingly puzzled by what to buy. I had been there many times to buy food for myself, but that day, the stakes felt so much higher: I was feeding someone else, someone who was ENTIRELY dependent on me and on my choices. Of course I understood I was meant to feed my child, but more importantly, at the same time, I was meant to nurture and nourish him.

I wandered and wondered: Shall I mash a sweet potato for him? But where does it come from? Is it safe for my baby? Who grew it? Was it sprayed with chemicals? What about the fish? Is it farm-raised? Why is the color weird? Going by what it says on the label, it doesn’t even sound like salmon….These were questions that had eluded me since I moved to NYC, and they all came rushing back now that I was feeding a baby. I spent a long time in the store, distracted, picking up the stuff I had called food for the past few years, and then quickly putting it all back. I felt totally disoriented, off-balance. Ultimately, though, what was happening was good—it was the beginning of a true realignment. I refer to this day as my food epiphany. I did not discover anything right there, I just began to dig up my long-buried, but deep and intrinsic connection to local and seasonal food—real food.

On that day, everything shifted back for me in a profound way. I left the supermarket empty-handed. It took me a few days to figure out how I would get the real food I sought from now on, not only for my child, but for myself again. I found my way to green markets and, eventually, to the Park Slope Food Co-Op where I could, on a reasonable and traceable scale, find everything that one needs to feed a family in a healthy, conscious way.

A few years later I opened my first restaurant, ICI (now called Maison May Dekalb ), just a few blocks away from our home, at a time when my commitment was stronger than ever, and the food aspect of my maternal instinct had expanded: I set out with the determined philosophy that I would not feed my neighbors anything I would not feed my children. My passion kept growing, and I was committed to sourcing the best possible local food, and never again switched to anything different. This was simply what I wanted to do for myself, my family, my community. Opening the restaurant, and running it for the past 10 years now, has expanded and deepened my understanding of the food system in this country and its implications on the livelihood and well being of those who produce it, as well as its impact on the planet.

By reconnecting with my roots, and with the intrinsic way of eating that had been mine for so many years, I discovered a deeper meaning to it that not only drives how I feed myself, my children, and the community in a healthy and delicious manner—and remains at the core of each and every week when I plan meals for my family and my restaurant—but inspires a way of living and working based on the simple ritual of eating well.